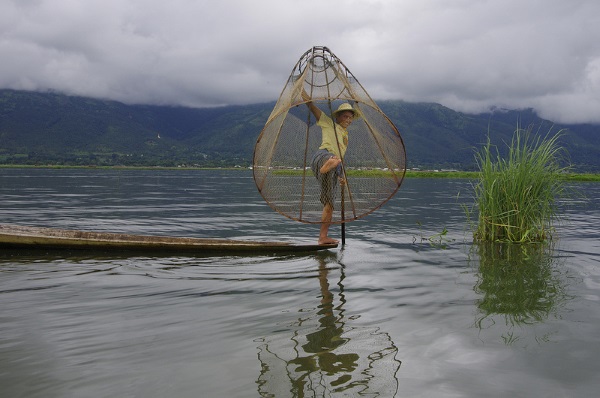 Inle Lake is the second largest lake in Myanmar and, with its leg-rowing Intha people, is a major tourist destination in Burma.

Although the lake is not large, it contains a number of endemic species that are found nowhere else in the world: over twenty species of snails and nine species of fish, like the silver-blue scaleless Sawbwa barb, the crossbanded dwarf danio, and the Lake Inle danio. It also hosts approximately 20,000 brown and black head migratory seagulls in November, December and January.

The people of Inle Lake are roughly 70,000 and live in four cities bordering the lake, such as Nyaung Shwe township, on the lake itself and in numerous small villages along the lake’s shores. They are collectively called Intha but the population consists of many other ethnic groups, such as Shan, Taungyo, Pa-O (Taungthu), Danu, Kayah, Danaw and Bamar.

Most are devout Buddhists, and live in simple houses of wood and woven bamboo on stilts. They are largely self-sufficient farmers, cultivating vegetables, rice and fruit in large gardens that float on the surface of the lake, anchored by bamboo poles. These gardens rise and fall with changes in the water level, so are resistant to flooding, and are incredibly fertile. These and other typical product, like tools, cheroots, textiles and ornamental objects, can be found at the local itinerant market every fifth day in five different lake areas. When held on the lake itself, trading is conducted from small boats. This ‘floating-market’ event tends to emphasize tourist trade much more than the other four market areas.

A popular local dish is htamin gyin – ‘fermented’ rice kneaded with fish and/or potato – served with hnapyan gyaw (literally twice fried). However Intha people mainly eat fish caught from the lake from small boats and with a special technique. In fact, local fishermen are known for practicing a distinctive rowing style which involves standing at the stern on one leg and wrapping the other leg around the oar. This unique style evolved for the reason that the lake is covered by reeds and floating plants making it difficult to see above them while sitting. Standing provides the rower with a view beyond the reeds. However, the leg rowing style is only practiced by the men. Women row in the customary style, using the oar with their hands, sitting cross legged at the stern.

Finally, the Inle lake area is renowned for its weaving industry, particularly for its silk-weaving one and its distinctive design called Inle longyi. The Shan-bags, used daily by many Burmese as a tote-bag, are produced in large quantities here and also a unique fabric from the lotus plant fibers is produced only at Inle lake and is used for weaving special robes for Buddha images called kya thingahn (lotus robe).

Your camera gear for Inle lake: